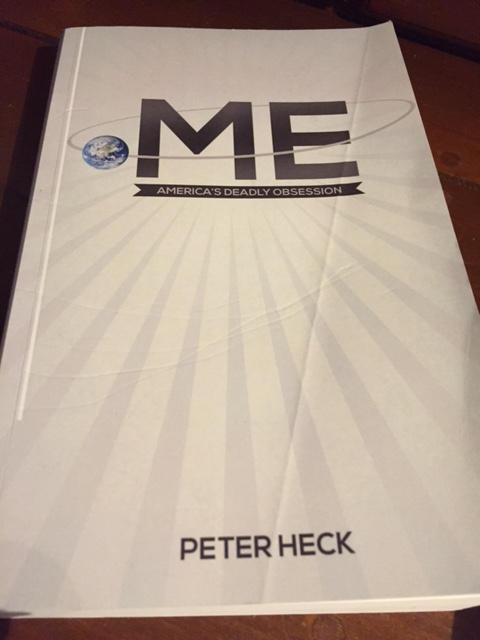 (a really bad iphone picture of my copy of the book, but I didn’t want to steal from his website. that would seem like i had learned nothing from reading it!)

When I joined Twitter a few months ago, I kept seeing tweets from some guy named Peter Heck. I liked what he had to say, in 140 characters, and I found out he is an opinion columnist for the local newspaper in Indianapolis. I was thrilled when I arrived at the Indiana Association of Home Educator’s convention in April to discover that Mr. Heck was speaking at a number of sessions. I was able to attend all but one of his sessions, and I promptly bought all of his books that were for sale.

(and this is where I apologize to Mr. Heck, on the off chance he reads this: when you used Joel Osteen as your example, and flashed his image up on the screen, I laughed, very loudly. I wanted to run up on stage, high five you, and carry you around like a champion on my shoulders, because you are SPOT ON. But I often laugh in weird situations. So…I apologize. But…I found it amusing because you were so brave and RIGHT. SO RIGHT. Keep preaching, man!)

Mr. Heck’s premise can be summed up like this: people, especially American people, and sadly, even more so Christian American people, are completely selfish and narcissistic. We have created a culture of “self” in term of image, worth, confidence, obsession, etc. But the Bible calls us to die to self, be filled with Christ, and live selflessly. In fact, while giving his talk entitled “Killing Me,” Mr. Heck said, “A Christian will not have ‘self-esteem’ in their vocabulary, because there is no self – only Christ.”

(again, I wanted to rush the stage. I *may* have shouted “Amen!” instead.)

The way in which Americans, and American Christians (“Burger King Christianity,” Mr. Heck calls it), focus on themselves is truly stomach-churning sickening. In his book, he covers eleven areas in which we are super self-obsessed: America in general, self-image, family, youth, media, marriage, money, church, government, science, and society. He finishes the book by talking about how JESUS is the solution to our problem of self.

I think the best chapter, hands down, is the chapter on the church. You will be hard pressed to find someone who loves the local church as much as I do. I have been in church since I was three years old, and I can tell you multiple stories of how Jesus has literally saved my live via His local body of believers. But because I love the church so much, I cringe on a regular basis at what we have allowed it to become, in terms of ecumenism, false teaching, tolerance, self-worship, and self-help messages instead of a place where wounded and weary saints can go to be refilled with the Truth of the Saving knowledge of Christ Jesus. Like Heck says on page 302, “It’s precisely what is happening in churches throughout the United States. They are no longer proclaiming Christ as both Lord and Savior. They are proclaiming Christ as Savior and ME as Lord.”

He then goes on to really pinpoint how modern cultural issues have been allowed to invade and influence the church to the point that your average “Christian” looks no different than the New Age practitioner next door. He also explains in great detail how the name it and claim it/ health and wealth/ dream big dreams “gospel” that is perpetuated by so many big-name “Christians” is doing such serious damage to American Christianity.

Really I cannot strongly encourage you enough to read this book. Mr. Heck says everything I wish I was smart and brave enough to say about our society and the selfishness tearing it apart. The root of most of our problems is pride, and he makes no bones about it (plus, he is very amusing; the stories about marriage, money, dating, and children had me laughing out loud). The solution – the only solution – is to remove all trace of our SELF and replace it with Christ.

The book is well-written and easy to read. It took me longer than I had hoped to read it, because it is convicting, so I’d read part of it, realize I had that particular issue that I had to deal with, and had to put down the book for a bit. But it wasn’t hard to read from a reading-level perspective; it’s just hard to read from a heart perspective.

You can buy the book from Mr. Heck’s website. I am not receiving anything to review this book or link to his website. Unless he sees this on Twitter, he won’t even know I’ve reviewed it. He is still a high school history teacher, supporting a wife and three kids, so order straight from him!