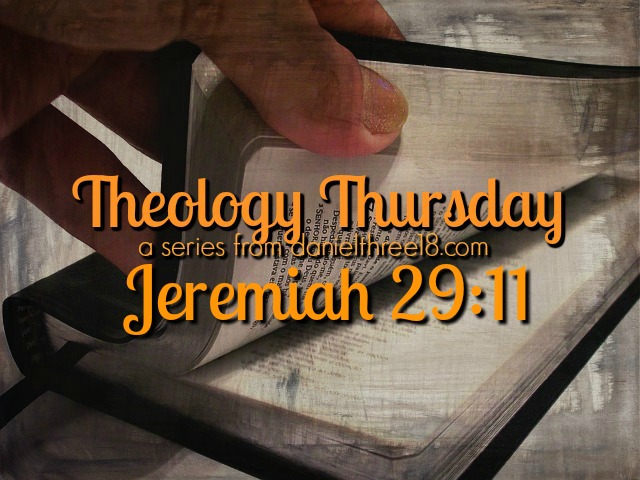 “For I know the plans I have for you, declares the Lord, plans for welfare, and not for evil, to give you a future and a hope.” – Jeremiah 29:11 ESV

This is one of the most popular verses in the Bible, I would guess, especially among women. Like Philippians 4:13, I have seen it on t-shirts, coffee mugs, bookmarks, stationery, home decor, and just about anything else you can imagine. It is also quite the popular “life verse” for people to claim as their very own special promise from God.

I want to be especially careful with this verse today, because God does  have a plan for each of us. However…God does not guarantee us a life of good and plenty. In fact, Jesus Himself says in John 16:33, “In this world you will have tribulation. But take heart; I have overcome the world.” (ESV). So, yes, God does have plans for us, but it is a stretch to take a promise given to ancient Jews living in exile, and claim is it as our own, and I hope you’ll let me show you why.

A Quick History Lesson on Jeremiah

Jeremiah was written by the prophet Jeremiah. He was called to be a prophet to the people of Judah, the southern kingdom of the split people of Israel, during the reigns of the final kings of Judah. While he served as a prophet, the people of Judah were exiled by Babylon under the destructive reign of King Nebuchadnezzar (yes, the same king who dealt with Daniel, the fiery furnace, and who received the words on which I base my blog title). Jeremiah was not well received by the people or the kings; he was in jeopardy many times. Eventually he, himself, was exiled by Babylon, but to Egypt. You can, of course, read all of this in the book of Jeremiah.

Jeremiah’s entire prophecy, as contained in the book of Jeremiah, is for the exiled Jews in Babylon. The Jews were overrun with false prophets who were promising them that God was going to allow them to return home to Judah (Jerusalem) very soon. But God was not going to allow that to happen; God was going to make them stay in exile for quite a long time. God’s message, delivered correctly through Jeremiah, was for His people to settle down wherever the Babylonians stuck them, be steadfast, and wait for Him. Oh, and they were to remain faithful and joyful while doing so. The Babylonians are going to destroy Judah and Jerusalem, yes, but God is sovereign, and He is going to raise up a Savior  to reunite Judah and Israel, and bring a new covenant.

Jeremiah calls down a series of punishments on Judah, reveals that salvation will come through their exile, explains the necessity of exile as punishment, promises that God will restore the Jews, chronicles the fall of Jerusalem and the aftermath, and calls down punishment of enemy nations. This is the history into which we have to examine chapter 29.

The Context of Chapter 29 Verse 11

As always, verses need to be read in context. It is terribly dangerous to take any one verse of Scripture and apply it to you, to a situation, to someone else; the original authors of Scripture wrote their words with specific meanings. There is a proper way to interpret Scripture (exegesis), and we must be careful to do so. The first step is to always read a verse in its context.

Jeremiah 29 is a letter Jeremiah has written to the exiles in Babylon from his place in Jerusalem. God is telling His people to settle into Babylon. Verse 5 tells them to “build houses, plan gardens, take wives, have sons and daughters, take wives for your sons and give your daughters in marriage, so that they may bear sons, multiply there, and do not decrease.” It is obvious that God intends for His people to live in Babylon for a long time (and we see that if we read the book of Daniel). In verse 7, God also says, via Jeremiah, “But seek the welfare of the city where I have sent you into exile, and pray to the Lord on its behalf, for in its welfare you will find your welfare. For thus says the Lord of hosts, the God of Israel: ‘Do not let your prophets and your diviners who are among you deceive you, and do not listen to them dreams that they dream, for it is a lie that they are prophesying to you in my name; I did not send them,’ declares the Lord.”

“For it is a lie that they are prophesying to you in my name; I did not send them.” This is the context in which 29:11 appears. Let’s pick up with verse 10:

“For thus says the Lord: ‘When seventy years are completed for Babylon, I will visit you, and I will fulfill to you my promise and bring you back to this place. For I know the plans I have for you, declares the Lord, plans for welfare and not for evil, to give you a future and a hope. Then you will call upon me and come and pray to me, and I will hear you. You will seek me and find me, when you seek me with all your heart. I will be found by you,’ declares the Lord, ‘and I will restore your fortunes and gather you from all the nations and all the places where I have driven you,’ declares the Lord, ‘and I will bring you back to the place from which I sent you into exile.”

The plans God has for His people? To return them to their promised Land – Jerusalem – Judah and Israel – the land of their original covenant with Him. In fact, if you read Deuteronomy 30:3-5, God tells His people, under the leadership of Moses, that if they disobey Him and then return their hearts to Him, He will scatter them to nations abroad and then restore them to their land.

Matthew Henry explains this very well in his commentary here on blueletterbible.org, if you need better explanation than I am offering! My point, however, is this: God’s plans for the Jews’ hope and a future are tied into their belief in Him and their seeking of Him, not just randomly naming and claiming said promise.

So What Does this Mean for Us?

Again, let me be very careful is saying this: God does have plans and a future for each one of us. Let me begin with the future:

It is my sincere hope that you have received the salvation so graciously offered by Christ Jesus, and your hope is in that, because then you know that your future lies in Heaven alongside the resurrected Christ.

But we cannot, and we must not use Jeremiah 29:11 as any sort of “name it and claim it” promise about our own futures when it comes to Christ, unless we are specifically referring to the hope that comes as explained by Paul in Philippians 3:20, when he says, “But our citizenship is in heaven, and from it we await a Savior, the Lord Jesus Christ, who will transform our lowly body to be like his glorious body, by the power that enables him even to subject all things to himself.” That should be our hope and our future.

As far as plans; God does have plans for us. Proverbs 16:9 (which Jeremiah himself quotes in 10:23) says “The heart of man plans his way, but the Lord establishes his steps.” So yes, dear sister, God does have a plan for you. But, oh, but listen closely. Contrary to what is so popular in preaching today, God has never promised us a life of sunshine and roses. According to the apostles Paul and Peter, life for a Christian is nothing but suffering we endure with joy for the glory of God in honor to be counted like Christ.

God’s plan is for us to draw near to Him, and He will use whatever means necessary to accomplish that, especially suffering. Anyone trying to tell you differently – that God wants the best for you, or for you to live your best life, or to have dreams fulfilled – is telling you a lie that straight up contradicts the precious Word of God.

Jeremiah 29:11 is not promising you a spouse, a child, a job, a promotion, a book deal, a raise, a miraculous healing, a winning lottery ticket, or even a brief period of time without suffering of some sort. It is promising the Jews they will return home some day.

But, sweet sisters, I Peter does promise us a hope and a future:

I Peter 1:3-9 tells us: “Blessed be the God and Father of our Lord Jesus Christ! According to his great mercy, he has caused us to be born again to a living hope through the resurrection of Jesus Christ from the dead, to an inheritance that is imperishable, undefiled, and unfading, kept in heaven for you, who by God’s power are being guarded through faith for a salvation ready to be revealed in the last time. In this you rejoice, though now for a little while, if necessary, you have been grieved by various trials, so that the tested genuineness of your faith – more precious than gold that perishes though it is tested by fire – may be found to result in praise and glory and honor at the revelation of Jesus Christ. Though you have not seen him, you love him. Though you do not now see him, you believe in him and rejoice with joy that is inexpressible and filled with glory, obtaining the outcome of your faith, the salvation of your souls.” (ESV)

Though you have not seen Him, you love him. Though you do not now see him, you believe in Him. Amen!

Cling to I Peter 1:3-9 and the future and the hope promised there – that is a Scripture promise that applies to you today, dear sister!