Frequently my husband and I joke that it would be easier to be “those Christians.” You know – the ones who don’t read their Bibles, who go to church maybe once or twice a month. The ones who don’t wrestle with Truth and theology. The ones who think that because they’ve been baptized, sporadically attend a “Bible” study, and halfheartedly give money to the church, they have fire insurance.

I have written before about my church background. My husband and I have joined a reformed church, because it is the healthiest church in the area, and I am honestly struggling, via study, with where I fall on the reformed spectrum. It’s easy for “cage stage” Calvinists, or maybe people who grew up with solid families in that tradition, to look down their noses at what I’m about to say.

I have also written before about how Keith and I don’t have a spiritual heritage. My mother aside, we are pioneering this whole “solid Christian family” thing – essentially having planted a new family tree at our marriage. It is lonely, it is difficult, and when your child is sobbing in your arms about the salvation of his grandparents – it is extremely painful. 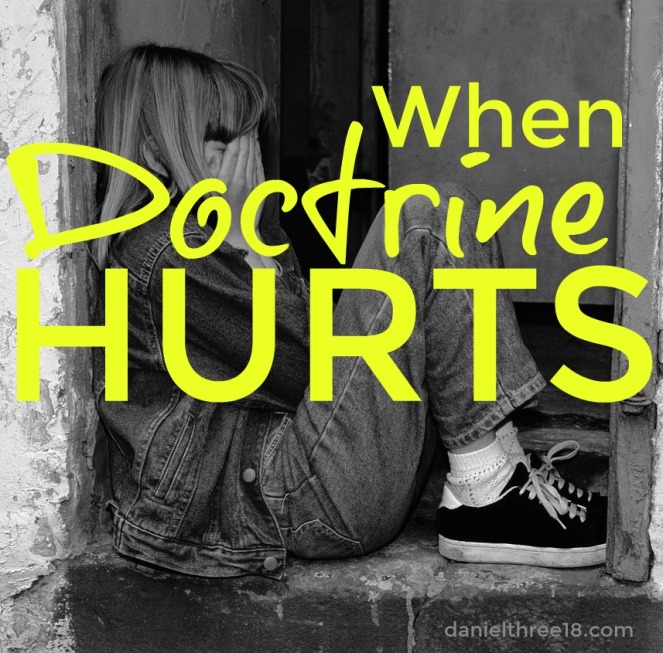 Therein lies my primary difficulty with the doctrine of election as explained by die-hard Calvinists:

How do I explain to my precious 7 year old that his beloved grandparents may have been predestined by God to go to hell?

I mean, seriously? He sobs himself sick over it. He doesn’t understand election, sovereignty, the entirety of the counsel of who God is. He’s seven.

(really…do any of us, though? I mean…who really understands all of who God is?)

It’s far easier for me, as a parent, as the daughter who has been praying for said grandparents for the better part of thirty years, to tell him that they don’t want to give up their human beliefs, their sinful choices, their pride, their illusion of being in control of their lives.

It’s far easier to lay the blame for their lack of salvation at the feet of free will.

It seems to me that it will be easier to “explain” God to my son in light of that explanation than in the light of “God decided before the world began to send them to hell.” It seems to me that my child will be less damaged in his beliefs at this age if it’s his grandparents’ fault, and not God’s.

I can read Augustine, John Calvin, John McArthur, Paul Washer, Todd Friel, James White. I can listen to all the conference livestreams and downloads of all the great preachers. I can hold my own, read and exegete and word study original languages with the best of the educated theologians out there (when I’m not mopping up spilled milk and doing my third load of muddy laundry).

What I cannot do is soothe the broken heart of my hysterical seven year old son, who is desperate for his grandparents to really listen to the gospel.

What I cannot do is allow him to share the gospel with them again, because it damages their relationship. They have specifically asked that he not “talk about Jesus things,” because they are convinced they are saved, and that our “religion” is ridiculous.

What I cannot do is boil down free will or predestination/election to a simple, child-friendly explanation that doesn’t pit God against family members.

Their hearts are hard. Only the Holy Spirit can change that. Regardless of where I fall on the theological spectrum, I know it’s up to the Holy Spirit, ultimately.

But what if God has decided not to soften their hearts? How do I lay that at the feet of a God that I want my child to love, to adore, to worship, to know is a good, loving, kind, God?

But explaining that to a beside-himself seven year old grieving the spiritual lostness of family members he loves?

And this is why I struggle with this doctrine…

6 thoughts on “When Doctrine Hurts”