I started this blog seven years ago as an infertility blog, but I don’t write much about our son anymore. I want to protect his story; his life. But today, our lives are very intertwined.

Our son is Black.

I have spent the better part of today weeping.

I have also spent a rather shameful amount of time on social media and listening to the radio, watching and hearing people decide where they fall: white police officers or Black lives matter.

(and as a side note, I am almost positive there are police officers of color…where are they in this mess?)

I have seen very few people realize it’s not an either/or proposition. You can love both; you can support police officers AND realize that Black people are not less-than.

Not that I’ve seen a lot of that in what I’ve read, sadly. I feel like we are on the verge of another all-out race war. My mom said she feels like it’s the 1960s and Kent State all over again.

Much like I hope people don’t judge all Christians by Westboro Baptist,  I hope Christians don’t assume that every person using the hashtag BlackLivesMatter really support (or are even aware of) all of their ideals.

(and saying hashtag AllLivesMatter is a smack in the face to Black people: you are negating what they are saying, facing, experiencing, feeling, fearing. it’s another facet of white privilege. which, if you don’t believe that exists, come grocery shopping with me next week.)

Perhaps your Christian friends just believe that Black lives matter, and because society has spent decades systemically trying to prove and justify otherwise, they don’t know what else to do.

I am petrified, quite honestly.

My friends who are police officers can come home, remove their uniforms, drive a family vehicle…it’s a job, an identity they put on and take off.

Is it dangerous? Yes, and I am grateful that every day they make the choice to put on that uniform. I am in no way trying to belittle their choices, their sacrifices, the fact that their lives are in danger while they work.

But my son can never remove his skin, and he never made the choice to be born Black. He didn’t choose to have people at our recent Freedom Festival parade skip over him for the second year in a row and not give him candy while the white kids on either side of him got handfuls handed to them. He doesn’t choose to have people stare at him everywhere we go. He won’t choose to be called n*****, or porch monkey, or any other horrible racial slurs that have recently regained acceptance in our society. He won’t choose not to be hired simply based on the color of his skin.

But this is still the reality of being Black in our so-called “post-racial” society.

And I have spent the day asking God, yet again, is He enough? Do I trust Him enough?

What if my son is shot by a confused police office who is afraid of a 6’4″ Black man who says he has a concealed weapon, reaches for his identification when asked, and that’s it?

What if it becomes a race war and our racist neighbors start burning crosses? (which happened in the town I grew up in less than fifty years ago) In our front yard?

What if our friends, who claim they love our adorable six-year-old cuddlebug right now, suddenly change their mind when he’s 6’4″, wears his hat backwards, starts “talking Black”, and is now a “scary Black man”?

Do I trust God enough to protect my son?

More importantly…do I trust God enough to live in His sovereignty if His plan involves the death of my child? Will I believe that God is still good if my son is taken from me?

And that is what has caused the most weeping today, because…

I hope my answer is yes, but more, I hope I never have to find out.

And that makes me wonder if I trust God at all… 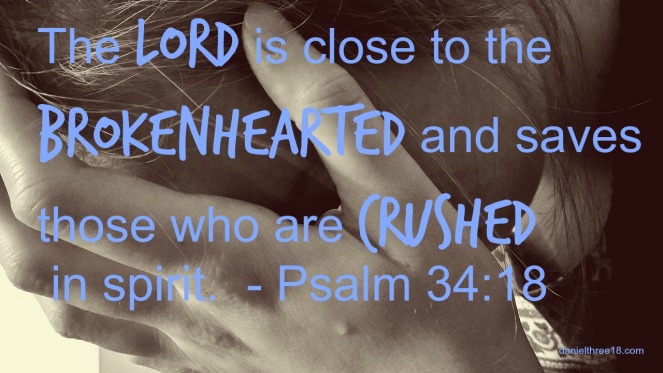 2 thoughts on “How Much do I Trust God?”