I have writer’s block. I don’t know what to write. Somedays I think of grand ideas for posts… and then other days, I think, “Who wants to read about your boring daily life?”.

Last week was rough, what with the death of a former student and all. She was only 12. I went to the visitation on Saturday. I thought it wouldn’t take too long… I waited in line to hug her parents for almost 3 hours. Don’t get me wrong – it was totally worth it and I would do it again in a heartbeat. I just wouldn’t plan a trip to the grocery store afterwards!

It was the first time it dawned on my that I cannot control my son’s salvation. I mean, I realize that until he’s older, it’s not really an issue. But it is, because I have to be teaching, and worse – modeling, Jesus and His love to Little Man now. And some days I don’t, because I’m tired and selfish.

So I sobbed and sobbed. And then I had nightmares all night about dead children and grieving parents. It was rotten.

*****
Sunday my dad and stepmom took us to my alma mater, Butler, for Little Man’s first ever college basketball game. He was in heaven. He loved it – he watched the game, watched the dancers, watched the students. The dancers saw him in the hallway and went gaga over him. An opposing player even commented on him.
Then he wouldn’t sleep because he was soooooo tired.
*****
Speaking of sleep, he has slept through the night for over two weeks now!! We have had a few screams in the middle of the night, that I honestly think are night terrors. I pick him up and he goes right back to sleep. I feel like a different person getting sleep!
*****
We had his first year check up two weeks ago. 30 1/2″, 22 lbs 4oz, totally lean and healthy! The doctor is very pleased with his growth and eating and everything. We’re just about done with the bottle. We finished our last can of formula earlier this week (hallelujah!!) and the transition to whole milk as been as smooth as his cute little bottom. He even drinks from a variety of sippy cups! We’re trying sippy cups before bed, but he doesn’t show much interest. We may just be outgrowing milk before bed.
So he got four vaccinations on January 13. On Sunday, ten days later, he developed knots in his left leg where two of the shot had been given to him. I call the pediatrician on call (at 7:30 am) and explain what is going on, and that I’m a tad bit overprotective, given the circumstances of last week. She assures me everything is fine.
Six hours later, he’s covered in a rash. While we’re at Butler. I call back, thinking he has developed measles or chicken pox. Apparently children can react to shots up to two weeks later.
That would have been handy to know… I wouldn’t have panicked, had I known that. I was told 4 or 5 days, not two weeks.
*****
My mother has had influenza B for two weeks, and hasn’t seen Little Man for almost three. It makes her sad and it makes me sad.
*****
And now, a few pictures, because Laurie says you want to see more of my cute little guy!! 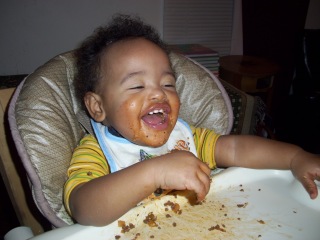